skip to main | skip to sidebar

The Amazing Things You Could Do - If you Really Wanted To! 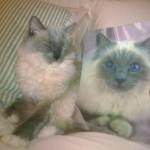 Mittens with cat mouse pad (at least the cat on the mouse pad has its eyes open.)
My cat, Mittens, is – how can I describe it?  Let’s just say he doesn’t have a lot of personality.  It’s not his fault that he was born with no street-smarts or even house-smarts, and sleeps 23-1/2 hours a day.  He’s also terribly timid and runs away meowing if he even sees an ant.  The most dangerous thing he’s ever attacked is a Starbucks straw.  So imagine my shock and amazement when Mittens recently caught a mouse in our living room!
I’ve seen similar things happen in my own life and in the lives of others.  People who "couldn't write" became writers, while others who "couldn't do math" became mathematicians.  Someone may think he or she knows what you can – or can not do. But the truth is no one really knows.  My friend, author Joyce McDonald, was told by a high school counselor that she wasn't "college material".  Now she holds Ph.D. in English literature, has been a college professor and is the author of six published novels for middle-graders and teens!
When I was in eighth-grade, my English teacher, Mr. Eul, gave us an assignment to write a short story.  As an aspiring writer, I was thrilled.  Back when I was in school, we were never given writing assignments, and I never imagined there were any living authors.  I pictured a cemetery filled with tombstones of my favorite writers with their last names first, like card catalogs in the library:
Baum, L. Frank 1856-1919.

L. Frank Baum failed at many things, such as running a chicken farm, before he wrote
THE WONDERFUL WIZARD OF OZ
“Remember,” Mr. Eul called as we filed out of class that day, “no stories from TV!”
I hardly heard him.  I was too excited about getting started.
That night, I set my parents’ old Smith Corona typewriter on my wooden writing desk, rolled in a fresh piece of paper, and began writing a story about a mute boy living in an eighteenth century seaport. 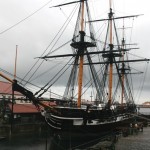 For the next week I stayed up late every night, tapping away.   All we’d written in Mr. Eul’s class up until then were check marks on multiple choice tests.  I couldn’t wait to see the look on my teacher's face when he discovered the brilliant writer hidden behind those check marks – me!
A couple of weeks later, Mr. Eul announced that he was returning our stories.  I could hardly wait to see what he wrote on mine, as he walked around the classroom passing them out.  When he came to my desk, he stopped.
“You didn’t write this,” he said, holding up my story.  I was stunned.  This was the last
thing I had expected!
“Yes I did,” I said.  But my voice sounded very small, and Mr. Eul looked very big looming over my desk.
“I don’t believe you, " he said.
The classroom was suddenly very quiet.  Everyone was watching, waiting to see what would happen next. Mr. Eul leaned over, his eyes boring into mine.  “I’m going to keep this story so you won’t try to use it again in high school.”
Mr. Eul didn’t think I was capable of writing the story I handed in, and I couldn’t find the words to explain that stories were part of me; they were who I was. I loved to write.  I would never "use" a story again!
Don’t let anyone tell you what you are and are not capable of.   Qualities such as excitement, courage, determination – and the fact that you probably don’t take 23-1/2 hour naps – make a huge difference in what you can achieve.  Whether you’re writing a story or chasing a mouse, remember no one really knows what you are capable of, not even you!

"Don't
underestimate me!"
As for Mittens, he’s back to attacking Starbucks straws.  But I have new-found respect for him.  You never know what he might do next!

Note:  This is a version of an essay posted by Pamela Jane on womensmemoirs.com